Race 50 technical kilometers on a mountain bike.  Run a hilly half marathon on trails.  Hammer uphill in a mountain biking time trial.  Turn on the leg speed for a 10 kilometer road run.  Sound like a challenging summer of endurance racing?

Participants in the Epic Mountain Challenge, a multi-sport festival in Pagosa Springs, CO on October 5th and 6th, will accomplish all of the above--in just two days.  The brutal mountain race will punish even the most prepared athletes, and a big purse of $60,000 is drawing some of the nation’s top endurance athletes.  Male and female competitors will race as individuals and teams in the first-year event that hopes to become a mainstay on the endurance racing circuit.

“Four all-out races in two days mean that recovery is crucial,” says prolific endurance athlete and coach Travis Macy, of Evergreen, CO.  “I’ll rely heavily on Vitargo S2 drink mix and Hoka One One shoes to make sure my body is ready for the next event.”  Macy is coming off a win and new record at the prestigious Leadman, which involves running and biking 284.2 miles around Leadville, CO, as part of the Leadville Race Series, but he doesn’t think he’s the favorite. “ Josiah Middaugh is definitely the guy to beat.  He is incredibly strong, especially in the mountains on the bike, and there’s a reason he’s one of the best XTERRA triathletes in the world.  The Team Teenek Racing athletes from Mexico will also be very tough.”

Middaugh, who is a trainer and coach with Dogma Athletica, has raced very well in 2013, with solid XTERRA results and a win over Macy in the GoPro Mountain Games Ultimate Mountain Challenge, which uses a two-day, four-race format similar to the Epic Mountain Challenge.  “This race is a true test of endurance, and it’s perfectly suited for mountain athletes, including trail runners, mountain bikers, and off-road multisport athletes,” says the Vail, CO strong-man, who is rarely bested in the mountains in summer or winter.

Athletes also have the option of racing in two-person teams, with each athlete completing two of the four races, and competition in this category will be sharp as well.  One favorite duo includes Trek Factory Team rider Russell Flinsterwald and pro runner Joe Gray.  Says Flinsterwald, “I've never done a relay style race so it should be fun! I think my partner, Joseph Gray, and I will bring a lot to the table. We are both coming off our World Championships and hope to carry that form all the way to the finish line in Pagosa Springs.”

Weekend warriors will toe the line with the pros at the race, just one example of the family/community-oriented nature of the event.  One family, the Krauses of Littleton, CO, will trade off time with their daughter as Greg, a pro rider with Team Groove Subaru-Alpha, competes as a mountain biker on a male team and Lindsay runs with a female team.  “This is an awesome event for the whole family, and we are excited to see Pagosa’s fall color,” says Greg.

Epic Mountain Challenge information and registration are at www.epicmountainchallenge.com.

Photo caption: Travis Macy, seen here fueling up at the Leadville Trail 100 Run in August, looks forward to racing against Josiah Middaugh and others at the Epic Mountain Challenge in Pagosa Springs, CO on October 5th and 6th. 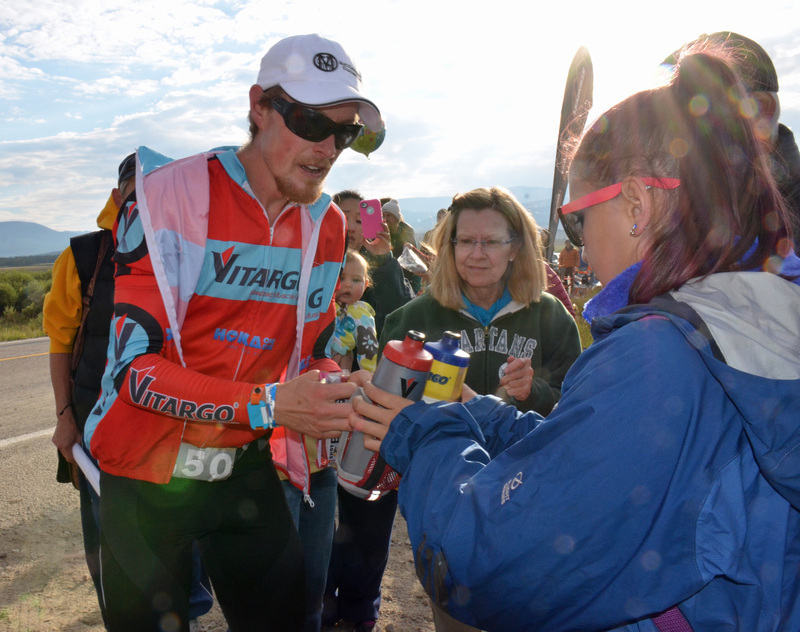